From Kings and Clansmen to the Catwalk

From the clansmen of Scotland, to the Kings of Great Britain all way to the modern day catwalk. Tartan has kept a prominent spot in fashion for centuries.
The story of the kilt and tartan is long, winding and dramatic...and it's not even close to being over.

Fashion Week showcases designers both new and established as they unveil their new collection for the season. Recently, the fashion week concept has come under fire and the "need" for constant, huge, new collections from designers questioned - is it sustainable, is it fair on the staff of these houses and is it even necessary to be producing so many new things so often? We uphold a slow but high quality and timeless fashion ethos here at Gordon Nicolson Kiltmakers...but fashion has played a huge role in shaping the tartan and highlandwear industry as we know it! 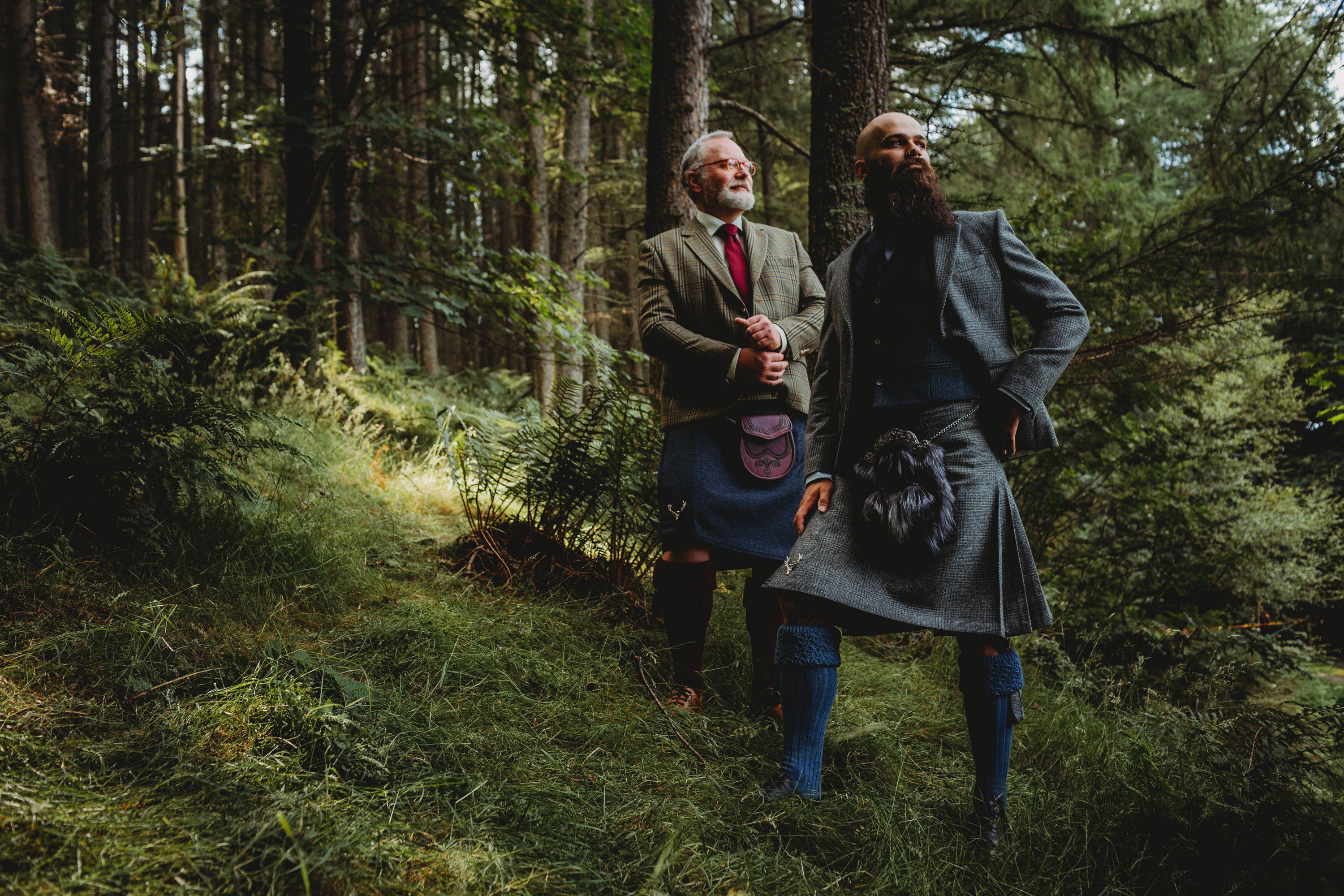 King George IV became the first monarch to visit Scotland since the coronation of Charles I in 1633. A lot had happened between Scotland and England in the two centuries since the last monarch to travel north and across the border - namely the Stuarts were exiled and replaced by the Hanovers who took up the British throne, five Jacobite risings culminating in Battle of Culloden on April 16th 1746 and the consequential passing of The Dress Act 1746 virtually eradicating the highland culture and the commercial production of tartan out-with the military. By the 19th century, it was time to bring Scotland back into the fold. Sir Walter Scott, among others, were writing about the highlands and glens of Scotland in an enticing and romantic way - people across Britain began to stop seeing the Scots has rebels against the British crown and disturbers of the peace. The timing was perfect for a Royal Visit. Orchestrated by Sir Walter Scott, the King's visit was to be filled with pomp and pageantry, a true spectacle of the drama and romance of Scotland Scott captured too well in his books. George IV wore an outfit inspired by the Highland garb costing £10,000 in todays money. Layers of tartan and the regalia of a Clan Chief adorned the King in Edinburgh. The Highlanders were far from impressed arguing that such a garment was inappropriate and never worn in Lowland Scotland, the kilt was too short and said the King wore pink tights underneath much to the disapproval of the hardened Scots.

Learn more about the beginnings of tartans here 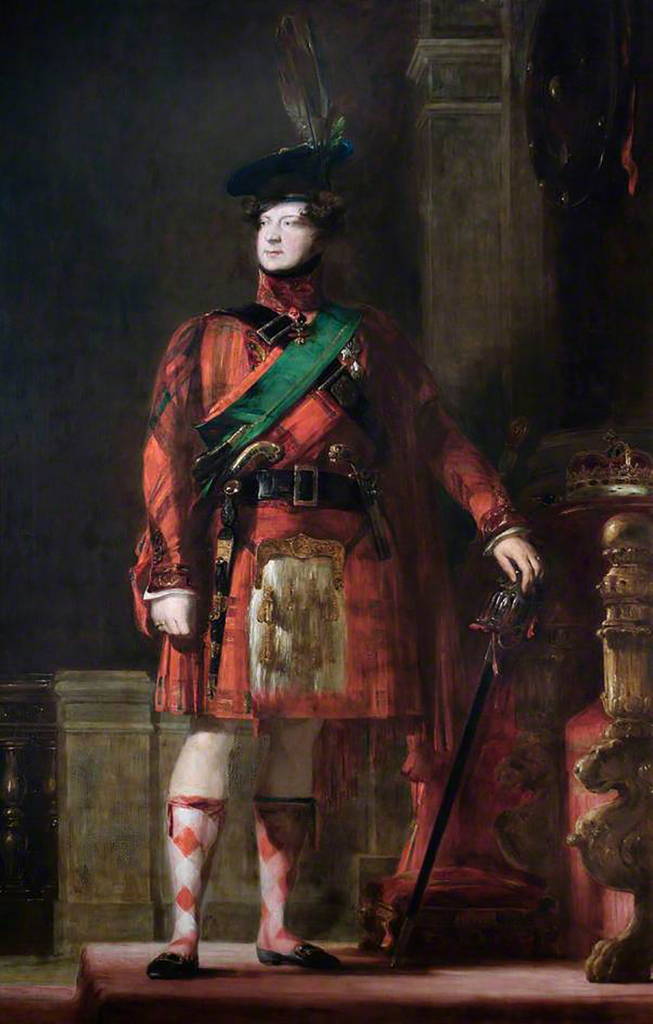 Well...fashion has never pleased everyone, but on the bright side, the looms were back up and running, Wilson's of Bannockburn producing tartan on a scale never before seen to feed the appetites of those hungry for a wee bit of Scotland in the form of it's cloth.

George IV wasn't the only Royal to embrace tartan...Queen Victoria and her husband Prince Albert championed all things Scotland. They purchased Balmoral, enjoyed Scottish culture and activities, embraced the dress upon their visit. They "Balmoralised" tartan and Highland wear. The Victorian's couldn't get enough! Tourism and tartan manufacturing boomed and the cloth took of new forms to feed this consumer obsession with it - Hunting and Mourning tartans were developed for example and the tailored kilt as we know it emerged around this time making it more accessible and easier to wear.
This regal connection continued, our Royal family today adorn tartan for both state visits to Scotland where they take on their Scottish titles or simply, as fashion. At the Braemar Gathering for example, Prince Charles The Duke of Rothesay will wear his Hunting Stewart kilt.
Catherine, The Duchess of Cambridge has adopted tartan in her own, iconic and influential fashion choices. She has been spotted a number of times sporting tartan including an Alexander McQueen Black Watch tartan coat. Depending on what you consider Royalty, tartan has made its way into the wardrobes of iconic people across the entertainment industry also.
From Beyonce to the Bay City Rollers, tartan has appeared both on and off stage on the backs of notable people. 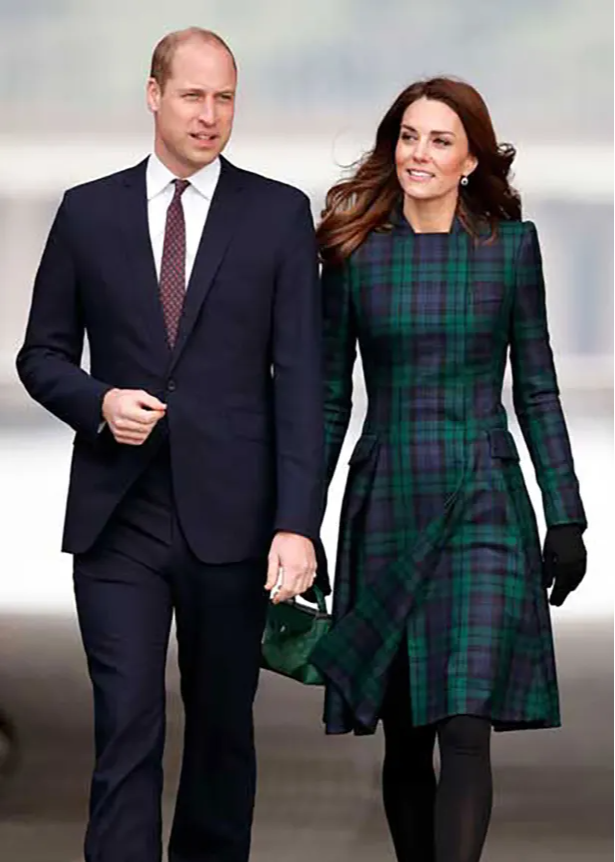 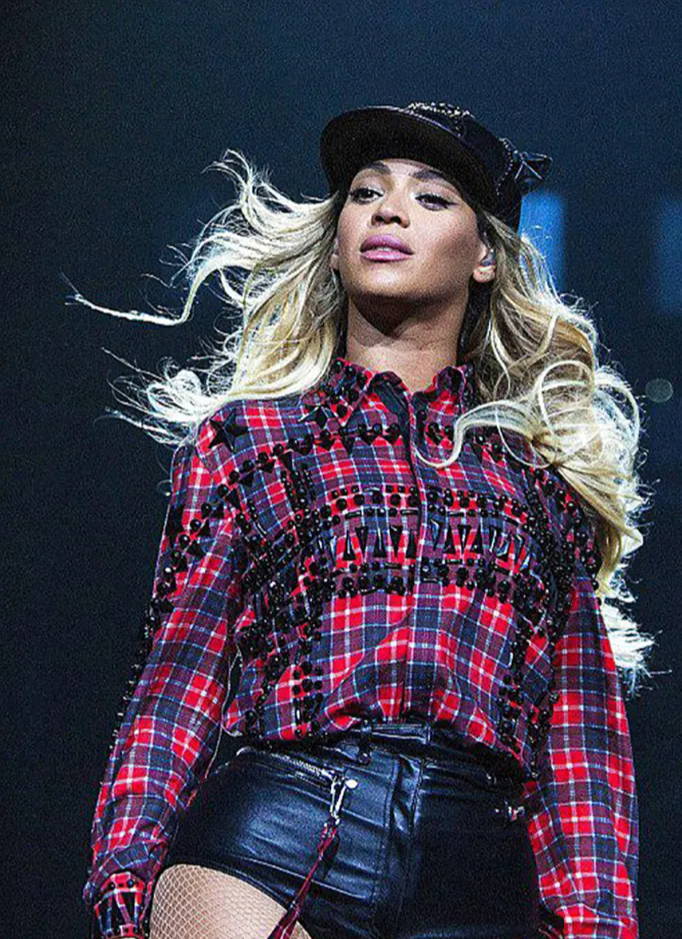 A Go To For The Fashion Greats 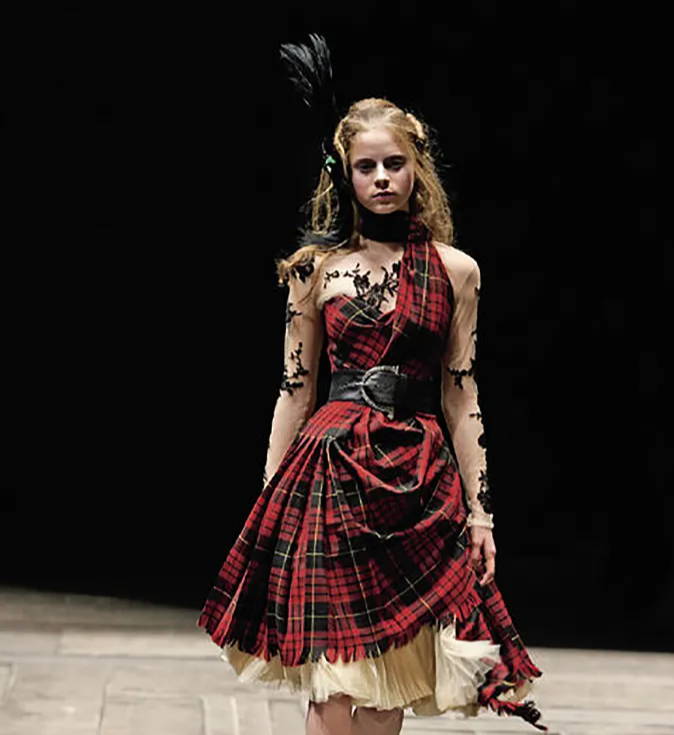 Alexander McQueen's Autumn/Winter 2006 collection, The Widows of Culloden. This wasn't the first or last time McQueen showcased his family tartan in his work, but for me this collection was an unforgettable stand out. McQueen and his mother enjoyed researching the history and stories of the MacQueen Clan. He played on the drama, romance and emotion of Scotland, a bit like Walter Scott, and created work in the form of fashion which told his interpretation of the stories beautifully, thoughtfully and creatively.
Upon Lee Alexander McQueen's death in February 2010, a plaque was erected on the Isle of Skye commemorating his life and work, a nod to Scotland's approval of his portrayal of tartan and Highland wear present on and off throughout his amazing career - Skye being a historic seat of Clan MacQueen.
Tartan on the catwalk didn't stop at McQueen. Many other fashion houses have incorporated it into their collections.
Vivienne Westwood has included tartan at the front and centre of many of her collections throughout her impressively long career in the every changing industry. She is a fan of all things Scottish...even the politics here having featured SNP "Yes" badges in her 2014 collection - a topic of heated debate...let's leave it at that. Prior to this though, her iconic Anderson tartan silk wedding dress, modelled by Kate Moss was one of those show stopping moments in fashion and tartan history. Consistently, tartan has appeared throughout her work in many forms.
Another British fashion house championing tartan as a true staple of their brand is, of course, Burberry. Now, us Scots will remember a time following the millennium when Burberry tartan got a bit of a reputation for being cheap, nasty and a favourite among the not so favourable "chav" era. I've got to give it to Burberry....they have pulled it back in amazing style. Once again, the timeless Burberry tartan lined trench coat is a staple fashion lovers both in the UK and around the world aspire to have in their wardrobes one day. 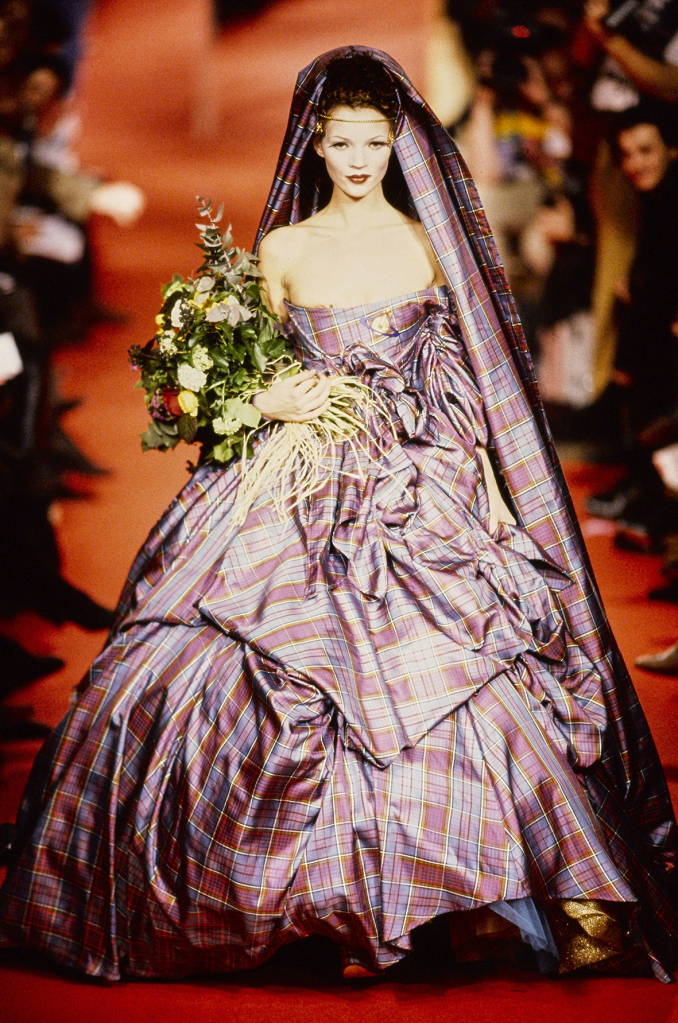 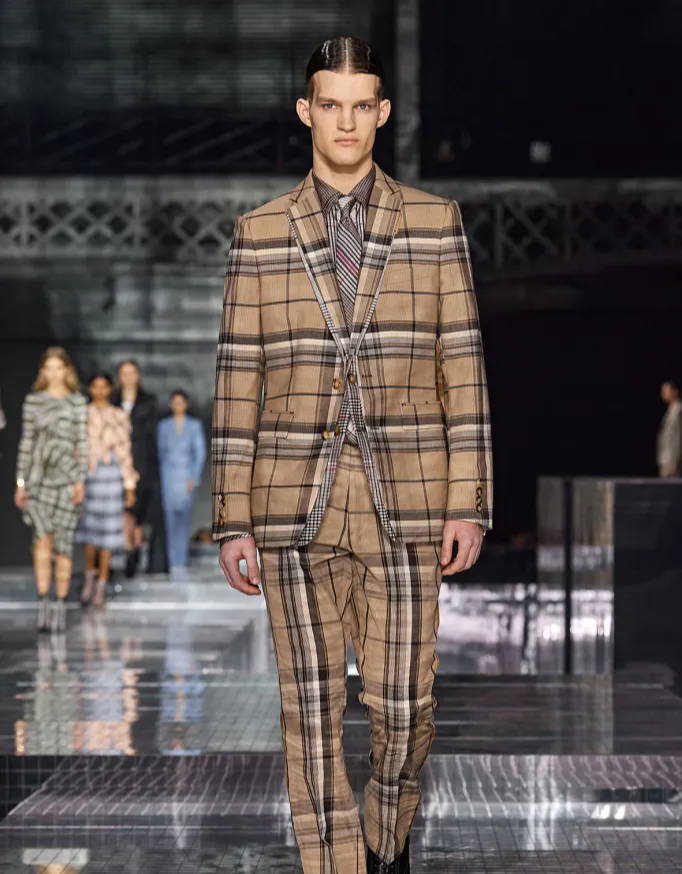 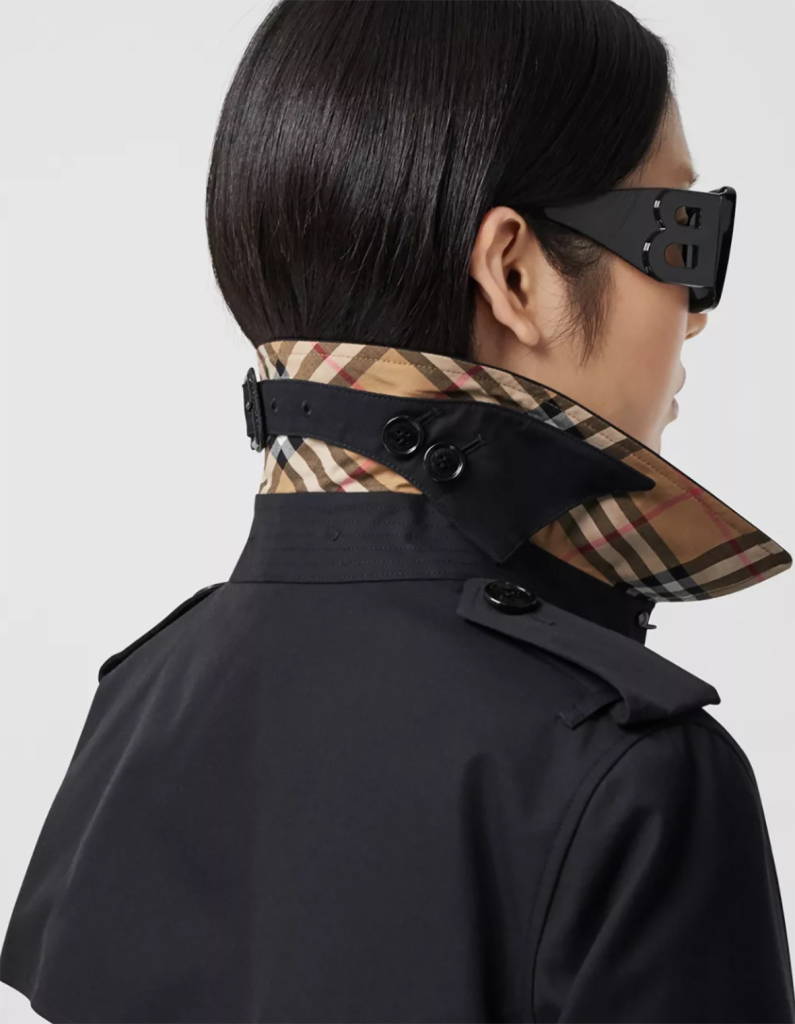 Burberry has both stayed true to what makes it the brand it is but continues to create pieces which challenge the tailoring, silhouettes and tartan it is known for.

A Scottish Icon Inspiring The World

It isn't just UK based fashion houses creating collections working with tartan. Chanel's AW2013 collection was inspired by the clanlands and incorporated tweed, tartan, leather and highland wear silhouettes and accessories. Gucci, a bit like Westwood, went big with tartan creating billowing dresses, jackets, kilted skirts, a collection in varying setts and colours. Versace, in 2018, also showcased tartan...personally, I think the colouration is a wee bit garish BUT it's different, it's creative and they took a chance from their usual aesthetic in creating it. 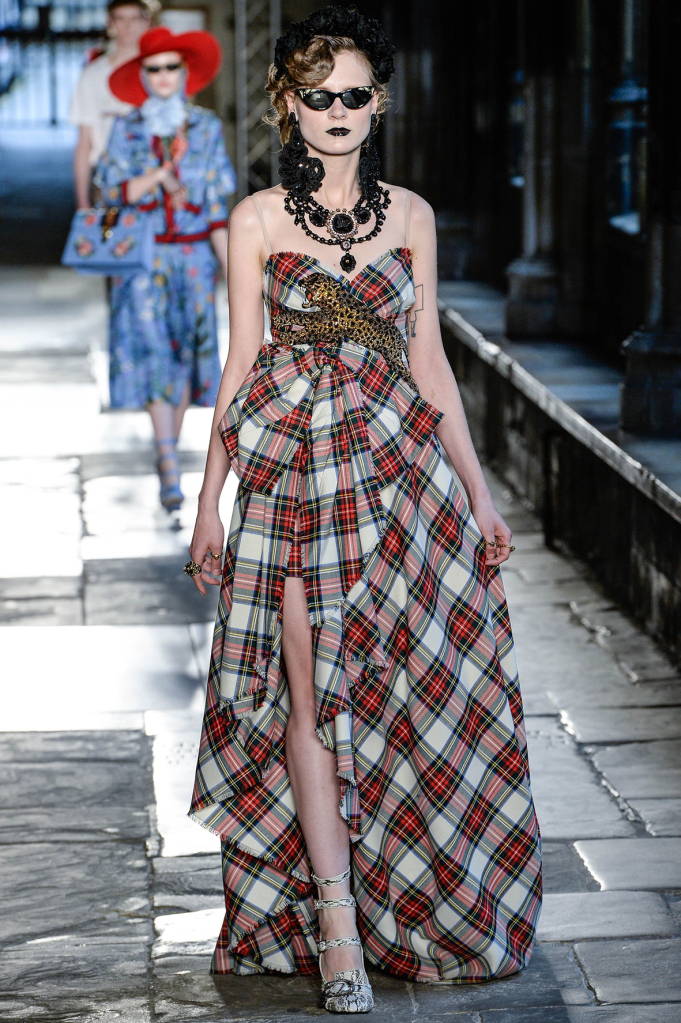 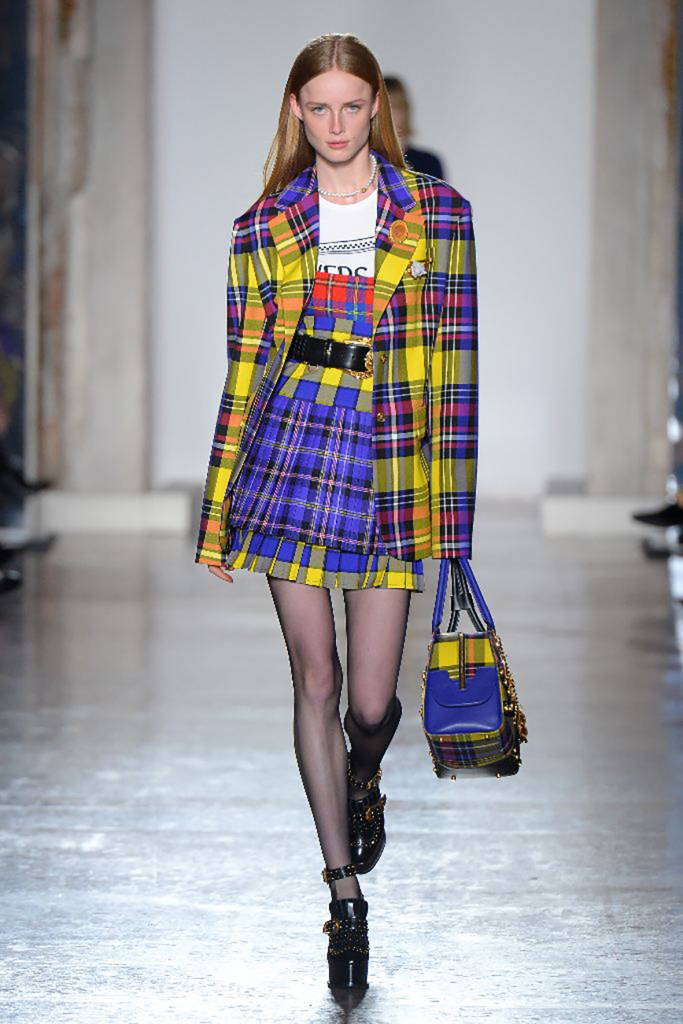 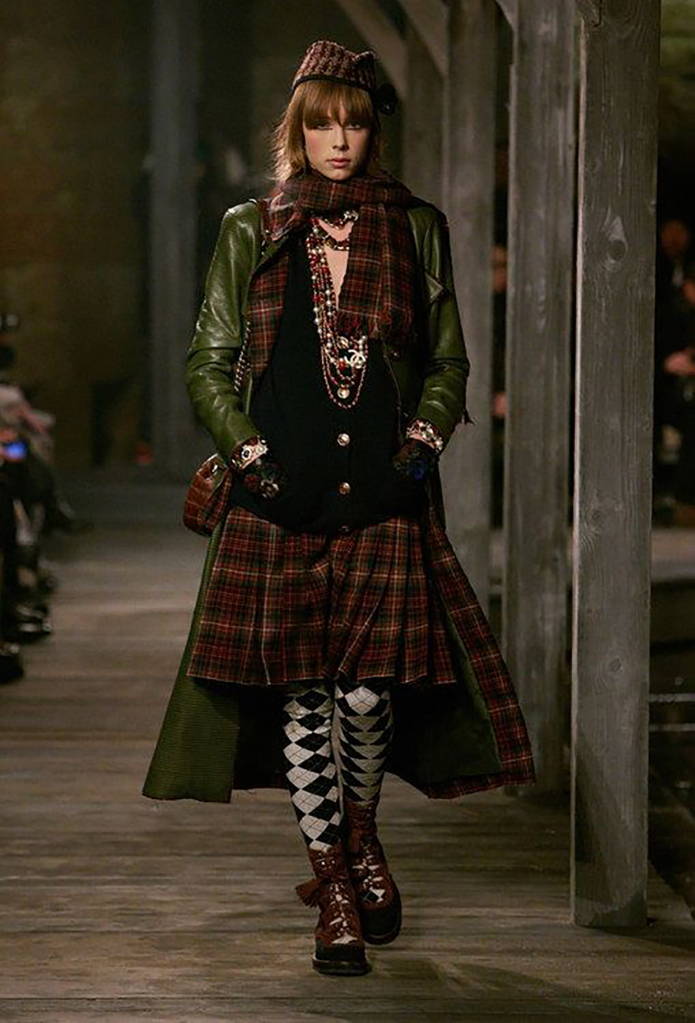 Gucci | Versace | Chanel
It's fair to conclude with saying, people.love.tartan. And the highland dress silhouette is both a dramatic and romantic silhouette that is truly inspiring to a designer.
At Gordon Nicolson Kiltmakers, we stay true to tradition and timeless elegance, but aren't afraid to push those boundaries. You must know the rules to break them...
Back to The Kiltmakers Chronicle
Use left/right arrows to navigate the slideshow or swipe left/right if using a mobile device