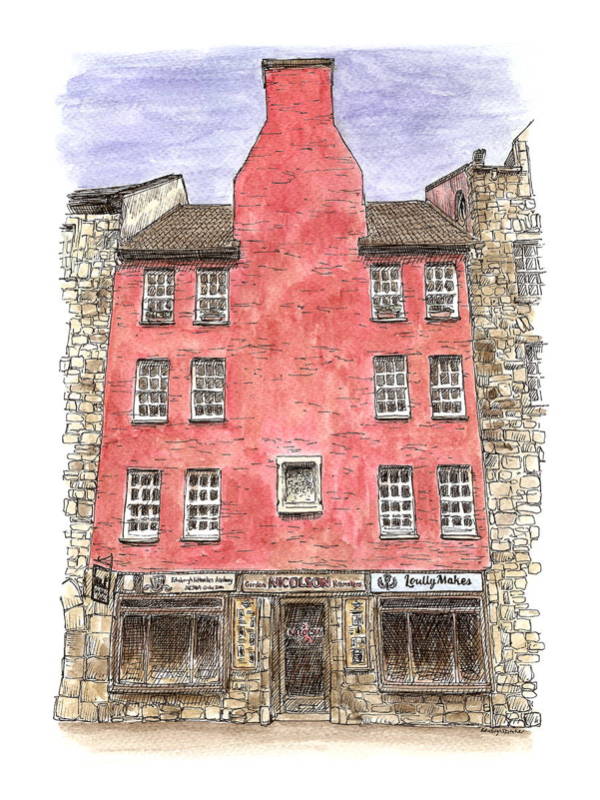 In the heart of Midlothian...

At 189 Canongate, to be exact, is the flagship store of Gordon Nicolson Kiltmakers. Nestled into the shop floor of a seventeenth-century tenement on Edinburgh’s historic Royal Mile, it has been trading handmade kilts and highlandwear since April 2009.

The man with his name above the door (you can call him ‘Gordon’) had a simple dream: to promote a better standard of kiltmaking. He’d worked in the industry before and wanted to do things differently. How? By focusing a little less on turnover and a lot more on authentic Scottish craftsmanship.

In many ways, Gordon was a lot like legendary author Sir Walter Scott. Not because he wrote epic pieces of romantic fiction (not yet anyway) but because he was an Edinburgh man with a Highlander’s heart. Like Sir Walter, Gordon is committed to the preservation and celebration of his national heritage through his favourite medium. He is a progressive traditionalist. Or a traditionalist progressive. They’d build him a monument one day, but it would only embarrass him.

In just one decade, GNK (we call it that for short) went from plucky outsider to highlandwear institution, thanks to a loyal following amongst those who know and appreciate a quality kilt. GNK kilts have created a stir at highland gatherings (the kind where people can tell their sett from their stripe) from Kirkcaldy to Canberra.

It seemed the dawn of an age of a higher standard of kiltmaking was upon us, and it became official when Gordon opened the Edinburgh Kiltmakers Academy in 2016. This was the fulfilment of a lifelong dream. Its mission? To establish a new benchmark for handmade kiltmaking, providing a new generation of kiltmakers with the skills they needed for a rewarding career. As of June 2019, 17 qualified kiltmakers have graduated (we never said it was easy). Many of them have gone on to work for GNK. 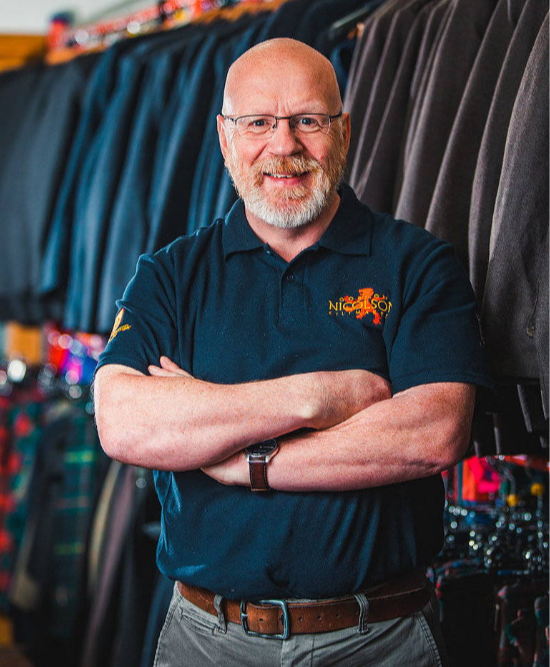 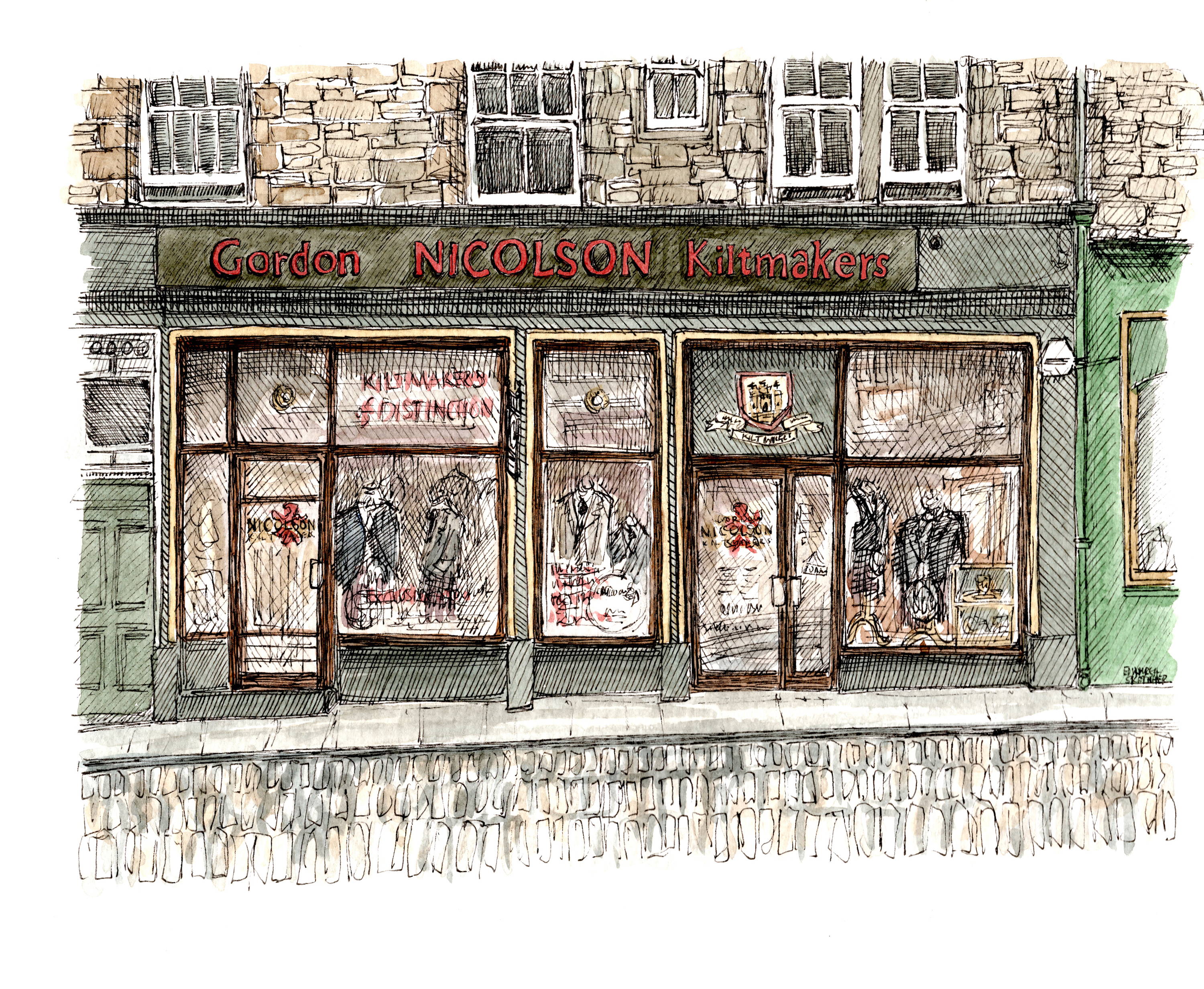 In 2017, GNK opened its second outpost on St Mary’s Street (site of the sixteenth-century Flodden Wall because location is everything). This provided a new home for both the academy and an already thriving kilt hire service, known for distinctive jackets, retail-worthy kilts in exclusive tartans, and the ability to outfit large (very large) groups.

That same year, LoullyMakes moved into a small corner of the Canongate store. This is the colourful offspring of Mrs (Louise) Nicolson, who combines Liberty fabrics, tartans and tweeds to make very beautiful, rather useful things.

In 2018, Gordon increased the GNK family still further when he took over Kilberry Bagpipes. The last handmade bagpipe maker in Edinburgh, it was not just very easy to get to (approximately three feet away from the St Mary’s Street shop) but another embodiment of GNK’s heartfelt artisanal values. Without Gordon’s involvement, Kilberry would almost certainly have closed, bringing an end to traditional bagpipe making in Scotland’s capital city.

Over the years, Gordon has been delighted to design a fair few exclusive tartans for famous institutions, battles and botanists. First came a commission for a University of Edinburgh tartan in 2007, followed by the commemorative Flodden in 2013 and the John Muir Way in 2014. Most recently, he has had the honour of designing for the Scottish National Team in 2017 and Celtic Football Club in 2018.  And that’s not to mention the large number of private and corporate commissions in between.

It’s a busy time at GNK, as anyone who’s been into the bustling Canongate shop will tell you. There’s a frisson in the air and excited murmurings around the sewing machine. What have we got planned? Well, that would be telling. But we’re a small business with big kiltmaking dreams. And it looks like the world might just be dreaming in tartan too. 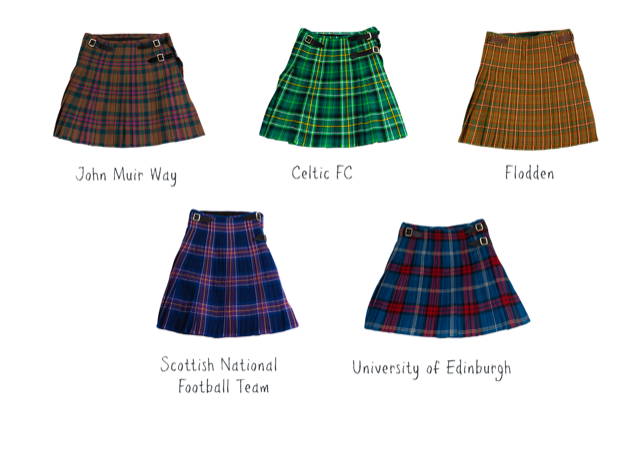