Make no mistake, life in the Highlands of yore was tough. So tough that a knife made it into our national dress. 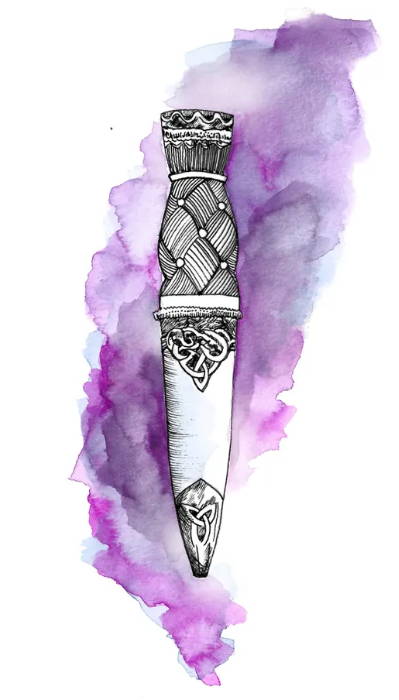 So what is a sgian dubh? Let’s begin with a bit of light etymology. And whilst etymology is boring, sgian dubh are interesting so bear with us.

Sgian dubh is Scots Gaelic for ‘black knife’, which is better understood as ‘hidden knife’. It’s a direct descendent of the sgian achlais (‘armpit knife’), so called because it was kept hidden in your, you guessed it, armpit.

Now back in the day, no self-respecting Highlander was ever without a knife. Even when visiting his pals - because you could never be sure when a mortal enemy or an overcooked piece of venison might jump out at you. It was, however, considered bad form to pack too much weaponry in someone else’s croft, castle or manse house. A bit like not offering to take your shoes off when you know someone has new carpets. So a compromise was reached. One small blade could be kept on your person, provided it was on display. Tucked into your hose. In this way, the ‘hidden knife’ came out of the shadows to become the knife of peace.

Sgian dubh today are short knives of no more than 3.5 inches with decorative handles and leather scabbards. We sell ours unsharpened. Sgian dubh can be legally carried in Scotland, England and Wales as part of national dress. It’s a respectful nod to the traditional Highland way of life.

How To Wear It:

To carry a sgian dubh, simply tuck it into the top of your hose on the same side as your dominant hand.